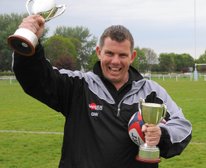 Long-standing club coach Gareth Waterfield has won the BBC Sports Personality of the Year Unsung Hero award for the West of England. Along with other regional winners, he'll be an invited guest at the annual award show in December to see whether he's also won the National Award. Filming for the Unsung Hero segment took place at the club on Wednesday at girls' training and hopefully will be shown on the night.

For those few in the club who don't know Gareth, he has quite a playing career, having been an England Deaf international. He's now sports teacher at Hugh Sexey School, and it's in that capacity that he first came across youngsters also playing for Winscombe. While coaching the Somerset Buccaneers regional side to three successive victories (largely using Winscombe players), he joined the club as a coach for one of the junior boys teams. That team won multiple county cups and produced two schoolboy internationals.

He then moved to girls rugby, establishing the club's first girls' teams, initially at U13 and U15 level, and it's for his contribution to girls' rugby that he is perhaps best known. Most notably, the girls won the National Cup at both U15 and U18 last season, an extraordinary achievement for a village club and an incredible testimony to Gareth's energy, enthusiasm and dedication.

So congratulations Gareth from everyone at the club. Good luck at the award in December and we'll all be cheering you on!